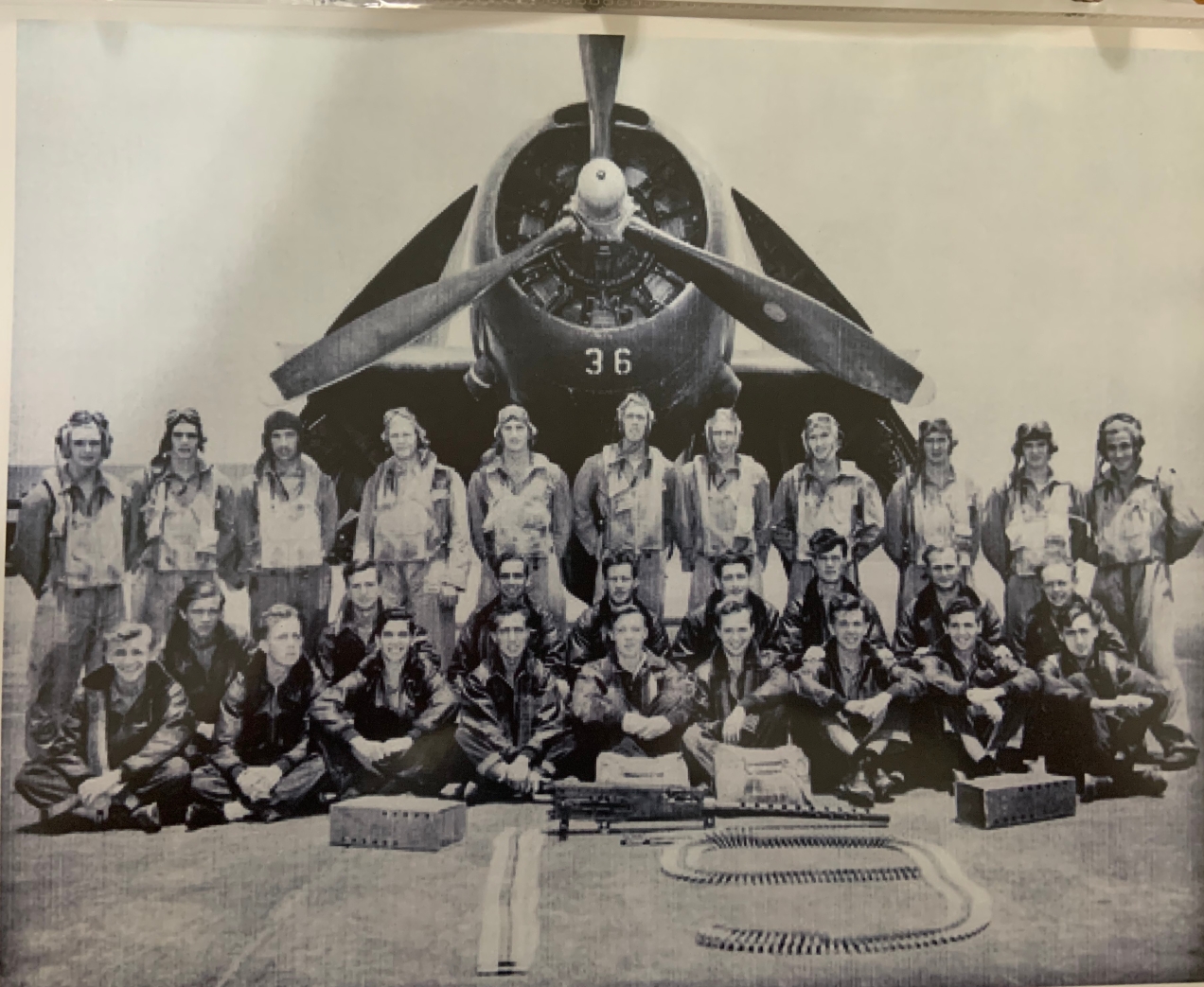 It’s a little noticed Flight-19 detail, but according to the U.S. Navy, (Image #1), there were two different models of TBM Avengers flying Navigational Hop-1 that day in 1945.  Four of the planes were shown to be TBM-1C’s , and the fifth, FT-28, was a TBM-3.  As an amateur Flight-19 historian, I had overlooked and made little note of this information until just recently when I noted what appeared to be a discrepancy in the book Discovery of Flight-19 by Jon Myhre.  Myhre a much respected Flight-19 researcher and author claimed that FT-28 was a TBM-3D not a TBM-3.

I was comforted knowing that I was not alone in my ignorance to the plane differences. For years this obtuse distinction between Flight-19 aircraft has understandably by and large gone unacknowledged by the general public. To the untrained eye, the aircraft look the same. If you weren’t aware that there were different TBM variants, you wouldn’t be looking for them.

This confusion regarding characteristic variations in aircraft over time has been further compounded by the erroneous photographs found in, books, newspapers, magazines, TV shows and movies. These images have been  unintentionally misleading the general public into believing that not only were all the aircraft the same but that there are existing photographs of the planes and crews together.

To investigate and prove or disprove these assertions, my wife and I went to the NAS Ft. Lauderdale museum, Ft. Lauderdale, Florida on a research vacation. What we didn’t expect to find in our inquiry was the lack of attributed photographic evidence and documentation found in the museums collection. Still despite the seemingly lacking material provenance we remained undaunted in our search. 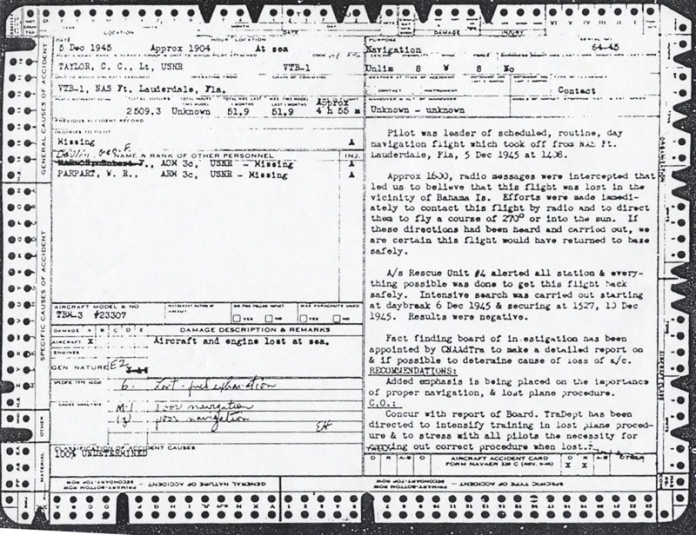 Not long after starting our investigation however perhaps the most familiar photograph of the plane famously known as FT-28 and most commonly associated with Flight-19 (Photo# 1) was made known to us by the director of the museum John Bloom. Before we could get our hopes up, we were informed that it was not the plane leading the “Lost Patrol”.

According to Bloom the credit for this discovery should be attributed to the founder of the NAS Fort Lauderdale Historical Association – Allan F. McElhiney (now deceased). I asked John how McElhiney, (a driving force behind the museums creation), knew it wasn’t the same plane? He was unsure how to respond and unable to go into detail ‘ he was just told that (he) McElhiney knew ‘.

So how did McElhiney figure it out? Let’s start with circumstantial evidence.

According to Bloom, ‘At the time of the Flight-19 disappearance there were approximately 180 Avengers, a few SNJ’s and other training planes assigned to NAS Fort Lauderdale ‘  From a practical perspective, because the Navy was re-consolidating and closing other naval aviation training facilities like NAS Miami in the months immediately following the war, it stands to reason that Ft. Lauderdale was a recipient of TBM, perhaps even TBF Avengers to use for training and parts. But this information doesn’t allow us to unequivocally claim that the plane is not FT-28. 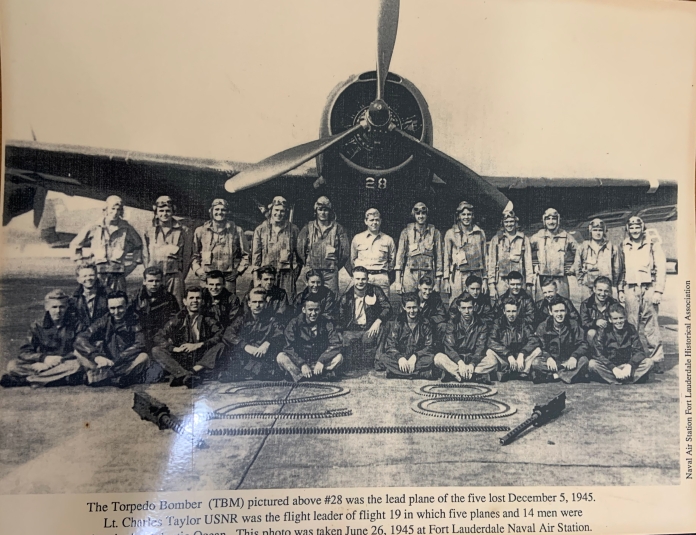 Let’s look further into the photo itself. To reach the same findings as McElhiney, one has to ignore all references to the number 28 in the photograph. After all you will see, it is the center of the mis-perception. We also need to examine a couple of generations of the TBF/TBM Avenger line to make the comparison distinguishing plane variants.

1.) Though it is not visible from the front (Photo #1) the TBM-1 Avenger had a single .50 caliber machine gun built into the nose of the plane mounted up close to the cockpit. It was powered by the 1700 HP Wright R-2600-8 engine which had a single engine scoop air intake built into the upper portion of the engine cowling .

2.) The TBM-1C Avenger kept the engine with the single scoop but added a second machine gun, moving one to each wing root and eliminating the nose mount altogether.

3.) The TBM-3 Avenger kept the machine guns in the wing root but replaced the engine with the 1900 HP Wright R-2600-20, 14 cylinder, air cooled radial engine. Designers evidently felt the added heat required an additional air intake to be added in the lower cowling.

As can be clearly seen in the photo above the second air intake is not present and the two machine gun mounts, one each, are just visible on each wing. We have therefore visually proven the theory put forth by McElhiney that the plane shown is actually a TBM-1C, assigned the tail registration number 28.

So, what difference does that make you may ask?  First and most importantly, it proves that the Avenger aircraft numbered 28 pictured is not the plane famously associated with Flight-19 and piloted by Navy Lt. Charles C. Taylor!

In the larger scope of all things Flight-19, it also means that we cannot rely solely on the painted on plane tail registration numbers to identify plane photographs and for that matter wrecks. Though the plane number may be the most focal point in finding and identifying wreckage, an in depth analysis using official documentation, the Bureau Number in conjunction with the examination of the plane structure is the most accurate means of verification.  The second set of numbers makes the difference in proving identification.

One of the questions I’ve had since the start of my investigation, and one subject I haven’t seen addressed very thoroughly is: How many planes were in the air that day. How many were in the air after or concurrently with the 14:10 take off of Flight- 19? How many other training or navigation problems flew out of Ft. Lauderdale? Could other planes from other ‘problems’ still have been in the air after 17:30 when darkness fell?  It is important to be able to eliminate inaccurate plane sightings.

I’ve read recently in Gian Quasars, “They Flew into Oblivion”that there were seemingly 27 Flights of planes scheduled to take off from Fort. Lauderdale Naval Air Station that day 69 years ago.  This is important to note, because though, Flight-19 (FT-28 Lt. Charles C. Taylor) was late taking off, (Flight- 18 Lt. Stoll had taken off approx 20 plus minutes earlier) there were allegedly seven other flights of aircraft, likely TBM’s scheduled to take off in 20 minute increments, after it.

Assuming that each flight had 1 Division, two sections (2 Planes per section) and a trainer, that would suggest that there were possibly up to at least 40 additional Navy training aircraft from Ft. Lauderdale: (not to mention Army or Civilian traffic), in the air along with Flight-19 at the time of its troubled flight.

Which means that the 15:00 (3PM) sighting of 4 TBM’s by the SS Ft. William and quite possibly the 17:50 (5:50) radar sighting of the USS Solomon’s of a group of 4 to 6 aircraft off Flagler Beach FL could have been other flights currently out training.

Out of all these aircraft, only a few reported contact with the flight.  Again, according to Quasar, only two other pilots had radio contact with Taylor. Lt-Cox in FT-87 (Flight 25?)and members of Flight 22?  So did no other pilot report anything in their after action briefings? Larry Kusche states in his book “The Disappearance of Flight – 19” (Pg.11) J.B. “Obie” O’Brien, Melvin Pike, and Nathan Puffer,  three other pilots up at the time heard enough of the conversation to determine someone was lost and didn’t know which way to go.”  Other than these, there were allegedly no others reported to help fill the gaps in the official Naval Inquiry Radio log evidence.

Astronomical and Geographical Facts and Knowledge