The only evidence of this wreck which I know to still exist are items removed from the scene by one of the persons who found the plane, Judge Graham Stikelether of Indian River County, FL.  A .50 Caliber Machine Gun with a bent barrel, a .50 caliber machine gun mount of some kind, and one or two other various un-identified parts, are all that is left.

Destroyed .50- Caliber machine gun found at the Felsmers Florida wreck in the 1960/70’s.

Now, despite there being dozens if not hundreds of missing Navy and Army aircraft from the mid -twentieth century in the waters in and around parts of Florida, this particular wreck is of great interest for a few different reasons.  We’ll focus on just one here.

This specific plane crash site stands out, first and foremost because it was  found inland, and not on the ocean floor!!

Of course, the idea of some of the missing Flight-19 planes crashing over land is a relatively new one, but it holds more merit, than saying they all were sucked up into some kind of vortex over the Bermuda Triangle, and it is much easier to investigate than scanning the sea bottom for metal wrecks. Still it has its challenges. 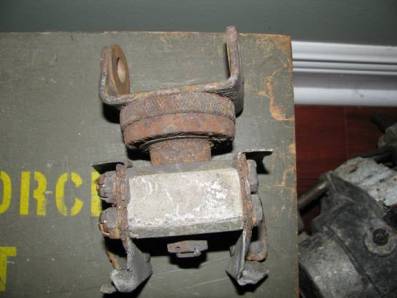 Can you identify this machine gun mount?

So how can we determine the aircraft identity? Well, one way is through part identification via serial no. plates and records if possible.

Jon had figured out long before I had, that we might be able to pin point the type of aircraft this machine gun came from if we could track  the serial no. from production to delivery.

Unfortunately, there are thousands if not hundreds of thousands of Browning .30 & .50 caliber machine guns out there.  Furthermore; over time the patent to produce them has been sold to dozens of manufacturers around the world. The best I have done so far has been to pretty much duplicate Jon’s research.  The gun as indicated on the plate shown, was made in New Haven Connecticut by the High Standard Company under the Browning moniker.

I’ve contacted Browning but as they don’t own the military portion of the company anymore the best they could do was forward my request to a history docent at the Browning Museum.  So far that lead hasn’t panned out either and though I haven’t given up and am working on the High Standard connections again as Jon had I don’t expect to make much headway.

However: I believe the key to the identification of the type of aircraft  could be narrowed down by identifying the machine gun mount itself.  First of all, the question is whether it’s a turret mount or a wing mount.?  If it is an AN-M2 aerial machine gun, which I can’t tell from the plate, is it likely a wing mount gun?

The Avenger had a specially mounted gun in a purposely built turret placed to the rear of the pilot. The TBM-1 like other planes of the period had two .50 calibers in the wing root for strafing. If the gun mount photo could be matched to that of an Avenger turret part we would have our answer.  If it turns out to be a wing based gun we’ve gotten no where. It wouldn’t even help determining if it was an Army or Navy plane.  So far photos I have seen of the turret have not shed any light.

My next stop in this part of the investigation is to visit the the Springfield Armory Museum right here in Springfield. Perhaps, I may be able to learn more about the gun there. If you have any information that may be helpful please feel free to contact me at fivesides2@yahoo.com.

Can you identify this mount?

Astronomical and Geographical Facts and Knowledge